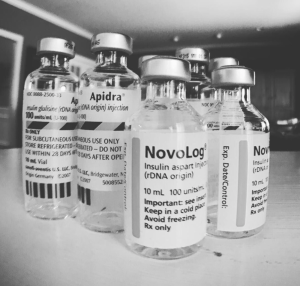 Caleb started using Apidra when he was seven years old after about four years of pumping Novolog.

I noticed immediate change in Caleb’s blood glucose control with Apidra. There was less of a need to prebolus. Seemingly never ending insulin tails were eliminated. We could safely be more aggressive with corrections and get him into range quicker. Post meal spikes were fewer and much easier to manage when they did occur.

It was so effective for Caleb that we were willing to change his Pod every two days rather than three. In our estimation, that was better than dealing with the peaks and valleys of Novolog.

We did that for a period of time, but when the smaller Pods came out, Apidra was working more reliably and we were able to go back to changing Pods every three days. Yay!

Then, after a fairly solid year of reasonably predictable blood sugars, things became unreasonably unpredictable. This started an analysis phase: hormones, food content, site location, age of insulin, etc. etc. We had gotten into a groove of constant reaction and fairly regular changing of Pods early for lack of any other explanation.

Given our history with Apidra, I was reluctant to concede that the insulin was the issue. It didn’t make sense after the evolution of working great, gradually becoming weak but consistently at the 48 hour mark, resolving that issue with the new smaller Pods and cruising along successfully for years after that.

After months of analysis, I had to consider it was Apidra and I asked for a vial of Novolog.

I braced myself for significant dosing changes in basal and IC ratios. I prepared Caleb for spikes after meals and long after effects from boluses. I expected the reverse of what we experienced when we switched to Apidra.

None of that happened.

There were slight changes in dosing – immaterial when you consider we are continuously adjusting basals and ratios for growth, activity, seasons of the year, etc.

He’s been using Novolog for about 7 months now – this was the first step in planning for his trip to Italy. It was a needed step regardless of his travels, but the urgency to tighten things up pushed me to seriously consider that Apidra might just not be working for us anymore. I’m glad Apidra helped us through some of Caleb’s younger years, and happy that he has options to address his changing needs.