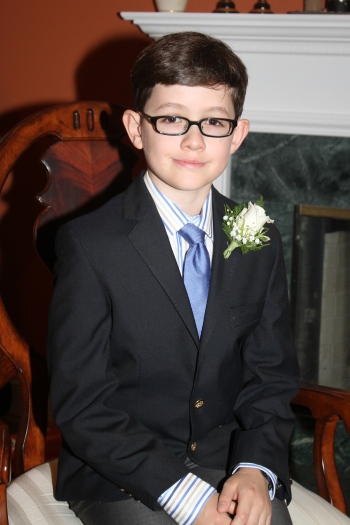 Caleb had his first communion this weekend. He was excited. A little nervous. I had to drop him off in the hall of the church with the other communicants about a half hour before the mass. Family waited in the church. Before dropping him off, Caleb checked his blood sugar. He was around 100 but with some insulin on board from lunch. We didn’t want a low during the next hour and a half, so he had a juice box. I gave him instruction to ignore DexCom unless he was 300 double arrows up or if he felt low. Otherwise, just relax and enjoy.

Easily said. Not so much done.

Each communicant is assigned a pew. He or she has a seat at the end with his/her family next to him/her. Caleb’s pew was toward the front on the right side. We had a very nice view as the children processed into the church. They all looped around a full time before taking their seats in their assigned pews.

We watched the children as they intently walked through the aisles. Some solemn, some smiling. All endearing. None saying anything to anyone.

Then Caleb turned the corner. My smile broadened when I saw him. He was walking as instructed, as the others did – hands in prayer, not too fast. As he got closer to us, he began to mouth something and sharply move his hands up and down a couple of times.

I only caught the end – “double arrows up”.

I felt a little badly that this was on his mind, but couldn’t help laughing at the animated way in which he was trying to communicate to us while also being respectful in church. Although he was passing by us to do his full loop around, he would be sitting next to us in just a moment. This tidbit of info could wait.

We have a still shot, which doesn’t quite capture the animation:

And an attempt to reenact the scene:

I shan’t name names, but I wasn’t the only one who laughed. Caleb completed his procession and took his seat. He told me “217 double arrows up”. I quickly gave a little bolus, he told us we were disrespectful for laughing in church, and the mass went on without further incident.

He was proud and happy at the end. I was too.

Please note: it is not advisable to make dosing decisions off of a CGM result. I am not a medical professional and the postings made herein should not be taken as medical advice in any way, shape or form.

12 Replies to “Diabetes Waits for No One, Not Even God”