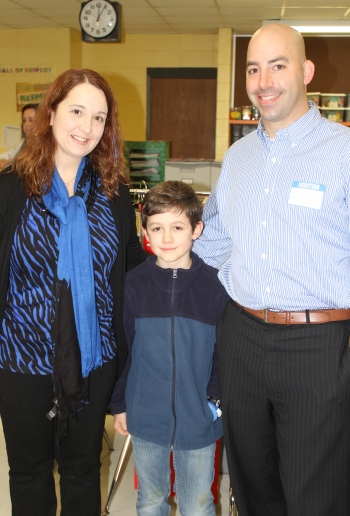 For the past three years we have celebrated World Diabetes Day as a community at Caleb’s school. Each year has been a little different.

There were three things that made 2011 unique: supporting Team Type 1, making a human blue circle and meeting Mr. B.

These were all special nuances to Caleb, but perhaps the most impactful one on this day was meeting Mr. B. He is the husband of Caleb’s teacher. He came in to visit with Caleb just for World Diabetes Day. Caleb and Mr. B. both love baseball. They are both fans of the New York Yankees. They are both living with type 1 diabetes.

I went into school during Caleb’s lunch period while his awareness video was being shown. I saw Mr. B chatting with Caleb. I saw Caleb’s smile. They spoke about baseball. Mr. B showed Caleb his insulin pump. Mr. B shared with Caleb what it was like for him growing up with diabetes. He told him he thought Caleb was brave because he’s so open about his diabetes.

Caleb has had a great school year with Mrs. B. Having someone who understands, who is accepting, who isn’t afraid and does not panic makes all the difference in the world for a student with diabetes. Our children cannot help but be singled out at school. There are things that they must do that their peers do not. Things that, despite our best efforts to normalize their school day, are indiscrete. Things that are simply non-negotiable and we cannot change them.

Spending his school days with someone like Mrs. B, who gets it, means that Caleb can focus on being a student first. He can focus on his favorite books, enjoy the new world of science uncovered for him, be challenged in his math group, play his violin, and joke with his friends.

It lets Caleb just be Caleb. A boy who, like his peers, has many dimensions. One just happens to be living with diabetes, like his new friend, Mr. B.