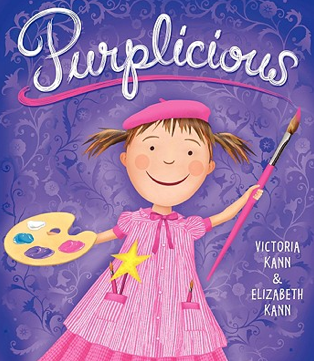 We are fans of the Pinkalicious series of books. Pinkalicious is fancy and loves pink, her parents are fun but they’re not shy about enforcing the rules, and Pinkalicious learns a valuable lesson about eating healthy, green foods. What’s not to love?

For Christmas, we chose to share the pink fun with my niece and the kids’ younger cousin by giving her the first three books in the series: Pinkalicious, Purplicious and Goldilicious. Since there were three books and I have three kids, I asked them each to make an inscription in one of the books to make the gift a little more special.

Colin’s summary of Pinkalicious addressed the perils of eating too many cupcakes because he’s all about making good food choices.

This story will teach you that you don’t have to agree with other people. Just be yourself. Love, Caleb.

An excellent point, indeed. Nevertheless, I asked Caleb to personalize it so that it would mean more to his cousin. He met my challenge with this:

P.S. So far in each grade I’ve had to teach people about diabetes. In the story “Purplicious”, Pinklicious is the only one who likes pink. Pinklicious feels like she is being teased. I feel the same way when I’m in front of people and they stare at me. At the end of “Purplicious” Pinkilicious feels better because she meets a girl who likes pink because it makes purple. I feel better because I get used to it and tell them what it is.

So M, if you ever feel like you’re being teased just know that you can stick up for yourself. It doesn’t matter what other people think. Caleb.

No matter how much I try to normalize his environment, and despite the best efforts of the caring people who surround him, this feeling of being different remains.

As heart-wrenching as it is to read his words, I take comfort in the wisdom that he has gained, and his willingness to share it with those he loves.

19 Replies to “Relating to Purplicious | by Caleb”