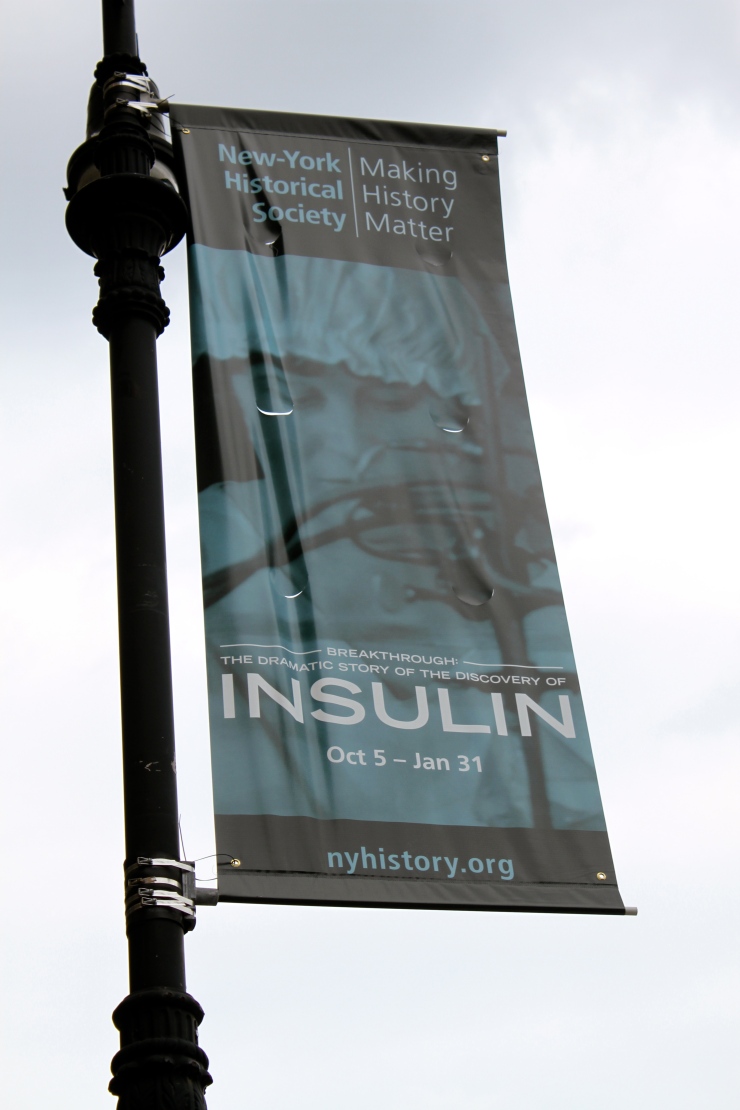 You may have heard about the exhibit that was held at the New York Historical Society based on the book Breakthrough: Elizabeth Hughes, the Discovery of Insulin, and the Making of a Medical Miracle.

My friend Kay, who I met on Twitter, mentioned that she was taking a trip to New York and I told her about it. I was disappointed that she and her mom would only be in town during the week because we wouldn’t be able to make the trip to meet them since the kids would be in school.

Then I thought, Why can’t we make the trip? I’ve been to almost all my kids’ school field trips and if there’s a field trip worthy of taking for my family, this one – one that teaches about the discovery of insulin while also meeting a model adult who has grown up with diabetes with her equally impressive mom – is it.

So that’s what we did.  We pulled the kids out of school early one day for a family field trip.

The exhibit was moving. We saw pictures of children before the discovery – starved just to stay alive in the hope that some kind of cure would come – and after – chubby cheeks and barely recognizable. There was even a letter from one of the boys to Dr. Banting stating with pride, “I’m a fat boy now.”

Elizabeth herself was kept alive with such meager portions during the years between her diagnosis and her first injection of insulin, that she dwindled to a mere forty-five pounds just before turning fifteen years old.

We saw log books listing people diagnosed with diabetes, their diagnosis date, food regime and date of death, which invariably was only a short time after their diagnosis. To see the handwritten notes defining such gloom was poignant.

There was the newspaper article with pictures of Banting and Best and the declaration that a cure had been discovered. I pictured myself today seeing a headline of a true cure for diabetes and thinking that the elation and relief people must have felt back then was equal to or greater than what I imagined feeling.

If you haven’t already read this book, I sincerely recommend it. I knew all the basics of the story. There was no surprise ending. But learning about that time – directly before and after the discovery of insulin  – through the eyes of the people who were living with diabetes, caring for those with diabetes and working on the discovery – was something truly profound.

So you know Banting and you know Best, but who is Ritzdorf, you may ask. Well it’s actually two people – Kay and her mom. Jody. We could have made the trip to NYC anytime. Sharing the exhibit with the Ritzdorfs is really what made our trip special.

This was my first IRL meetup with any of my online D friends. I wasn’t sure if meeting someone live started things over fresh, or you picked up where you left off online. It was the latter. I was in the hall reading one of the items on the wall, and I recognized Kay as she walked by. I turned and just said, “Hey!”

We made full introductions and continued enjoying the exhibit together. Afterwards we made our way to the gift shop. All the while Kay and Jody chatted it up with my kids. They were genuinely interested in each of them. It was like they were family. If you ever want to win someone over, talk to their kids earnestly. It warmed my heart and made me smile. I knew Kay and her mom were good people and weren’t just being polite when they asked to meet up.

Caleb was matter of fact about it all, but underneath I know he was very excited to be in Kay and Jody’s company – people who really understood what living with diabetes is. Colin and Kay talked about the book. Colin is the reason we purchased it, he was so interested in reading the full story. Lila almost exploded with glee when she caught a glimpse of Kay’s pump – running over to me in her five-year old discrete way of whispering not so quietly in my ear, “she has an insulin pump and it’s PINK!”

We were able to convince them to have dinner with us. It was so enjoyable to get to know them better and hear about their trip to New York. It was Kay’s first time to the Big Apple. We talked about diabetes and about things not diabetes. If not for the need to get the kids home to bed on a school night, I’m sure we could have spent hours and hours talking.

In fact, I’m hoping on their next trip to NYC we’ll be able to meet up again – if they’re willing to put up with us, that is!

Hands down, this was the best field trip ever!

Shortly after our meeting, a special package came in the mail. Caleb’s new Huskers hat displaced even his NYY one for more than a week straight.

Thank you, Kay and Jody, for making the time in your brief trip to New York to meet with us.  We are so happy to know you and call you friends.

24 Replies to “Breakthrough with Banting, Best and Ritzdorf”