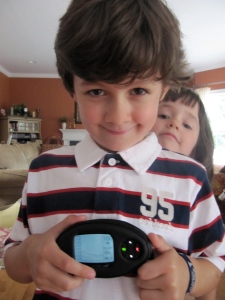 I admit it – I resisted.  Mostly because I could not bear to think of having to pierce Caleb’s skin for yet another reason.  Finger sticks and pump insertions seemed like quite enough. Adding a CGM – another poke, another pain, another apparatus strapped to him – seemed too much to ask.

But it remained in the back of my mind always.  Every time we waited for the blood drop to register – that little game of roulette we play ten to twelve times a day – what number would pop up? It’s part gamble.

Caleb and I talked about it.  He bravely agreed to try it.  I nonchalantly started the insurance process expecting it to be a long series of rejections and appeals. I was still reluctant and took every step with much more time than was necessary.

Then we went out to eat for grandma’s birthday.  Caleb chose his favorite – pasta.  I will not allow diabetes to make more choices for him than necessary.  So even though I hadn’t dosed him for regular pasta in a long, long time, I gave it a try.  I weighed his portion and bolused him reducing it by an amount I remembered working back when we weren’t eating new pastas.

We were off to a good start.  Blood sugars were behaving nicely.  But then shortly after he went to bed he yelled saying he felt low.  He was 22 and he got there within minutes. We’ve never seen 22 before.  More alarming was his reaction: “Mom, why does everything look so small?”  “Mom, I feel like I’m gonna die.”

He was back in range quickly.  But I don’t want him to ever experience that again.  I couldn’t help but think CGM would help.  So I stepped up the insurance process and within a week I got the call that he was approved.

Fast forward to the first insertion:

So how is it working?

I made the mistake of expecting miracles when Caleb started pumping.  I didn’t make that mistake with CGM.

It is helpful.  It is informative.  I appreciate having to play roulette less.  I felt a sense of relief immediately being able to watch Caleb’s blood sugar change rather than get slapped in the face every two hours or so.

But, like pumping, it’s far from perfect.  Glucose readings must be verified before acting, so we have yet to reduce finger sticks.  In fact, we’ve done more than ever to verify all the ups and downs within those ten to twelve times a day we traditionally check.  It’s not always accurate.  Sometimes it’s WAY off.  But much of the time it is meaningful.  And it’s true what everyone says: the trends are the real value, not necessarily the numbers.  But, when it does work and work well, it’s actually pretty fabulous.

I really want the theory behind CGM to be the true reality of CGM.  I want it to tell me what his sugar levels are 24 hours a day.  It doesn’t.  It doesn’t “catch” his lows and highs. It alerts us to the possibility or even likelihood of lows and highs – but sometimes not even that accurately because there is a lag between its readings and his actual blood sugar. Compound that issue with its readings being off maybe ten to twenty points and it’s easy to miss lows.  So it can catch his highs and lows, but it doesn’t do that as a rule.

So far CGM has softened the extremes in Caleb’s blood sugar readings.  It is a step forward in Caleb’s care regimen. I am glad to have it.  It is, however, a much smaller step than I would have liked.

In all fairness though, we are still new to it, and I am optimistic that our learning curve will improve and the small step will become at least a little bit bigger.

Nevertheless, it is too much to ask.

11 Replies to “Taking the CGM Plunge”